I’ve wanted to write a post about the history of soap as it is thousands of years of tradition, invention, trail and error and just in my opinion at least a fantastic topic. But I do understand that while I am fascinated by it, it is not something that everyone finds so interesting. So I’ll do my best to keep it short simple and brief.

There is Roman legend that soap was named after Mount Sapo which was a sacred site of ancient animal sacrifices. After the sacrifice, rain would wash the fat of the animal, the ash that had collected down to the Tiber River banks. The legend goes on to talk about how the women would only visit certain parts of the river after a heavy rain as they claimed their clothes were much cleaner. There has also been evidence of early Babylonians making a soapy substance as early as 2800BC. Clay cylinders found have a soap like material in them whilst on the cylinders themselves, there are inscriptions to show almost instructions on how to make soap: fats boiled with ashes.

200AD, Galen, the Greek physician, suggested soap for both medicinal and cleansing purposes.

In the 7th century, soap makers began to appear in France and Italy where soap was made with goat fat and Beech tree ashes. And, around this time, the Spanish began using olive oil to make soap (Savon de Castile anyone?) . It wasn’t until the 12th century that the English began to make their own soaps.

In the 19th century, soap making was one of the fastest growing industries in the U.S.

The most difficult part of soap making at this time, was making sure the lye was the correct strength. During World War I, commercial soap as we know it today came into existence. Injuries sustained in war increased the need for cleaning agents. But the ingredients needed to make soap were not easily found. German scientists created a new form of “soap” made with petroleum by-products and detergents were born.

Soap: a cleansing and emulsifying agent made usually by action of alkali on fat or fatty acids and consisting essentially of sodium or potassium salts of such acids

Commercial soap manufacturers learnt that they could actually remove the naturally occurring glycerine from soaps that give it its moisturising properities and add it into your creams and lotions you need to use when commercial “soaps” dry out your skin.

1970’s- body washes were born (notice, not a soap, but again made with by-products)

There you have it! A VERY brief history of soap!

How to make soap?

Then you get into the fun part! Or in my case the hardest part. Which do you add? Do you add the milk as the liquid? Water? Coconut milk? Which fats do I use? Lard? Tallow? Palm? Olive? Shea? Avocado? How much of this do I add? That? This? Do I add clays? Extracts? Silk?

Once you’ve measured out your ingredients, then the magic happens! Blend until you reach a good emlusion, then pour into a mold. Let sit for at least 24 hours or more, then cut! Then you have to wait for your soap to cure. The longer it gets to cure, the better the bar will be. Soap and wine have so much in common! Usually one to three months is a good cure time for most soaps. 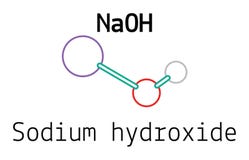 Yes, lye. NaOH. Caustic Soda. It’s not a very nice chemical is it? I’ve got the lye scars to prove that it can be a very dangerous substance. But, as I said, you cannot create soap without it. You can substitute water for strawberry puree or cream. You can substitute tallow for olive oil or lard with shea butter and still get a fantastic bar of soap. But you cannot switch out lye for something else otherwise you are not making soap.

There is good news about lye though! By the time the soap comes to you, there is no longer any lye left in the bar of soap. It is all used up during the sponification process which usually happens during the first 48 or so hours.  And all that remains of the lye in the soap, is simple sodium. Salt. And salt just helps to make the bar harder.

As I mentioned above, to make soap you need a liquid. And then you mix things together, then you pour… yes. Pour. When you make soap, your soap is very liquidy, then the sponification (the process of the fats, oils and such being converted into soap) process takes place and your soap gets firmer. After about two to three days, the lye has done it’s job, converted the fats and oils into soap and you are left with an awesome loaf of soap!

But, the sad part, soap making requires a lot of patience. And I mean a lot of patience. You can begin using your soap after about a week, but that soap might be harsh and probably make your skin red and tingle (and not in a good way). It will also last about as long as a Cadbury Cream Egg in my house. Your new soap will still be very soft (like play dough), and will “melt” as soon as it comes in contact with water.

At this point in the soap making process, there isn’t any lye left. What’s left behind has more in common with common table salt than lye.

Letting your soap cure, allows for all that liquid used in the soap making process to evaporate. And the longer the soap is allowed to cure, the harder and milder the soap will be.

Now for the crazy part. Some soaps take forever to cure up. I’ve some soap that I’ve been curing for six years. Some for two. I made a batch of “Snot Soap” (pure olive oil soap) last year and won’t touch it for at least another year. It depends on the ingredients used. Some fats, oils and butters need longer to cure while others can be as hard as a rock in a matter of days. It’s all about learning how things work!

If you ever plan to make your own soap, do lots and lots of reading. Watch lots and lots of videos. Take the proper safety precautions. But then throw most of it all out the window. Rules are meant to be broken! My most popular soaps have broken all the “rules” of soaping!

3 thoughts on “The History and Making of Soap”

This site uses Akismet to reduce spam. Learn how your comment data is processed.

Looking for something special?

Recent Posts: Scrub Me Down

I’ve been MIA for quite a while, but real life has gotten in the way!

Having a problem with dry cracked hands? Get your soak on! Did I mention this soak is fizzy?

Tired of your crappy and rugged cuticles? Give this Soothing Cuticle Balm a try! Go on. I know you want to!

Be prepared to dazzle everyone with this ombrè inspired bar of soap just in time for the funniest day of the year!

Finally! The Antarctic goes on vacation with this topical, sunny, and cheery hibiscus toner!

Which category are you partial too?

Join the Instagram fun and show me what you're working on!